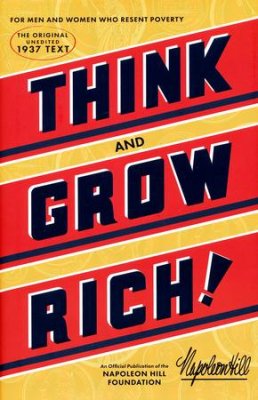 Posted at 12:46h in FITTEAM Book of the Month by fitteam

Lesson 1: Use autosuggestion to build an unshakable belief in yourself.

Autosuggestion is a psychological technique developed in the early 20th century.
Basically, it makes use of the Placebo effect by turning your goals into self-fulfilling prophecies through imprinting them in your subconscious.
Hill says a key trait of all successful people is this absolutely incredible, unshakable belief that they have about themselves and their goals.
It’s not a result, more a necessary prerequisite, to become successful.
By telling yourself over and over and over again, that it is possible for you to achieve your goals, that you can make your dreams a reality, and that you have to go your own way and can’t let anyone interfere with it, you form these beliefs in your subconscious.
This builds not only the confidence you need to follow through on your actions, but also lets your goals seep into the unconscious part of your brain, until you automatically align all of your actions in a way that leads you towards your goals.
But what else can you use this belief that could move mountains for?

Lesson 2: Be stubborn and always stick to your decisions.

Maybe you could use it to become a little hardheaded. In fact, you should.
Hill quotes lack of determination as the most common reason for long-term failure.
Millionaires, on the other hand, make snap decisions, and then they stick to them.
Come hell or high water.
When Henry Ford decided the Model T would be his masterpiece, he knew this would be it for the long haul. In spite of people telling him to come up with a new model again and again, he stuck to his guns. How long did production run?
The first model was produced in August 1908, and started the craze that turned into 15 million units total – the last of which was manufactured in 1927 – 19 years later.
Opinions are cheap. Everyone has one, and most people dispense them like they’re paper towels, only cluttering your mind with negative influences.
So be careful who you share your goals with, make it a set of trusted advisors, close friends and allies only – a mastermind maybe?

Lesson 3: Join a Mastermind group to accelerate your learning.

Yes, this is where this concept comes from and yes, it’s that old.
Napoleon Hill invented the Mastermind group as we know it today.
Millions of people use it (I’m in one as well), and with the internet, it’s become a worldwide phenomenon, as it’s gotten easier to hold a Mastermind session with people from around the globe.
Here’s how Hill defined a Mastermind group originally: “The coordination of knowledge and effort of two or more people, who work toward a definite purpose, in the spirit of harmony.”
Today, most groups consist of 4 people, which are not necessarily working towards the exact same goal or at the same company, but who are in the same industry and share many problems, obstacles, as well as character traits.
However, groups can be of any size, the only rule being that each session must follow a specific agenda (here’s the one we use).
The main benefit is that by combining the brain power of two or more people to solve problems, the result is more than the sum of its parts.
There is a surplus from sharing experiences, ideas and skills that could never be achieved if each person worked on their stuff alone, and that’s why Masterminds are so powerful.
I highly recommend you start one, you can find groups all over Facebook and online. Simply use Google Hangouts to run your sessions and then create a protocol for each meeting that you share with all members.

Cited from Think and Grow Rich!